In March 2019, the following artwork was commissioned as part of Champlain College’s (QC) Indigenous Awareness Week. The goal was to create an image that reflected on traditional knowledge, colonization and trauma as well as the multigenerational resilience of Indigenous people.

Taking a Mohawk First Nation’s approach, the painting was constructed through narrative, contained in the symbol of a wampum and spread across a 3ft by 8ft canvas. The two-row wampum, to provide some background to this symbol, was a historic treaty agreement between the First Nations people and the Crown that stated that each nation was of its own way of life, living side by side.

The imagery within this symbol was meant to timeline the role of colonization and its impact on Indigenous wellness, including how genocide, missing and murdered Indigenous women, legislative violence and Residential schooling led to multigenerational trauma as well as outstanding socio-economic marginalization. The  wampum symbol within the current societal context thus reflects the social commentary on the poor state of ‘nation-to-nation’ dialogue with Indigenous communities. The mural also acts to reflect the multigenerational wisdom and resilience of Indigenous people through the ways communities have adapted to cultural safety and that ways nations stand in solidarity against injustice to land, body and culture.

This mural now permanently resides at the Champlain College in Quebec as a conversation piece among its students. Reconciliation begins with dialogue. 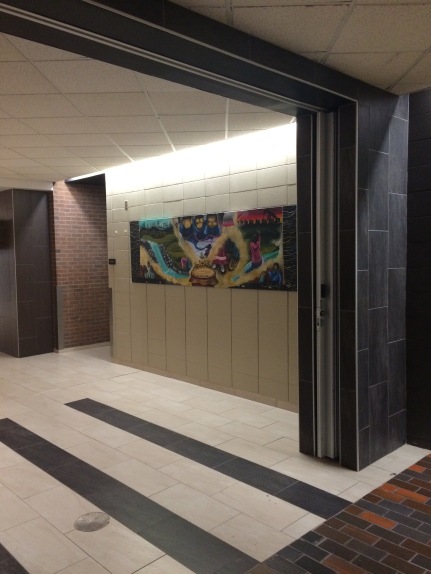 This entry was posted in Artworks. Bookmark the permalink.